.reviewers could be likened to Crows, couldn’t they? poring over a corpse, swallowing the parts they like, working in a loose anarchic team to make sure all the morsels are snatched up. and often viewed as harbingers of one form of misery or another. grief is the thing with a blog.

.maybe it’s a laboured analogy to a food chain, the circle of life, reviewers are the front line in cultural digestion of a piece of art. then come the public, who really clean the bones and come in greater numbers.

.of course that all enforces the idea there’s some sort of old hierarchy in place. and takes a sort of nineties-mind assumption that everyone and their dog won’t start a theatre blog. ‘cultural digestion’ – what sort of a phrase is that? they’ll let anyone have a website these days.

The Crows Plucked Your Sinews is acutely aware of hierarchies. Providing a condensed spectral record of contemporary British-Somali identity, it demonstrates a sort of ‘state of the spirit/diaspora’ through tales of lives lived in violence, from 1914 to the present. There’s an inescapability to all the violence – it’s an unavoidable aspect of everyone’s lives, whether modern British Somali or 1910s Dervish warrior. All of which signposted for me that our Britain is forged on divisions, which run deep, affect whose voices we hear and whose faces we see and in which context.

Something I realised post- seeing (and reviewing) The Crows Plucked is that acknowledging there were BAME people in the audience legitimised the performance for me. I’m pretty sure I’d have had a different impression, would have felt less at ease (more of a voyeur?) if the audience were entirely white. It’s alarming that the idea I am outside of a white echo chamber is so worthy of note but I think it’s important to acknowledge that Contact seem to be really good at diversity. Their 2014-15 Annual Report states over 70% of audiences being under 35, and over 30% coming from BAME backgrounds. 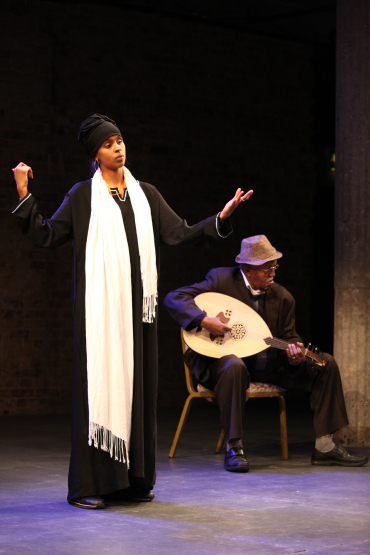 If I’m thinking of theatre as a conversation (which I’m wont to) then the conversation ought to have fair representation of the peoples it’s about, which extends to the audiences, not just artists. In a similar context it’s worth noting that there was also a BSL interpreted performance of this piece that I wish I’d booked to see. I’ve been working with BSL theatre and interpretation recently and besides being useful for research purposes, I’ll bet the BSL for this piece would have been gorgeous. And I’d be intrigued to know how the Somali in the text was handled. Bilingual theatre’s ace enough; I’m sure trilingual theatre would have proper blown my mind.

There’s a strong throughline of disenfranchisement in The Crows Plucked; Yusra Warsama’s Suuban is nothing but alienated by the USA’s televised glorying in the execution of Osama bin Laden – all just an echo of an empire which did Somalia no favours. Disenfranchisement is a real, massive problem in contemporary Britain and Cameron’s Tories seem intent on tackling it in the most prescriptivist, alienating way possible. So it’s very gratifying to see a piece with English and Somali, performed in an atmosphere, a theatre, which is accessible, and not just superficially.

A good crop of the reviews I’ve written for Exeunt about shows at Contact (particularly their Young Company shows) have been gushing about the level of engagement with new voices, marginalised voice, young voices etc. Surely theatre’s a far better mechanism for social inclusion through accessibility than doling out English tests and threatening exportation. Hopefully the stuff Contact and companies like Common Wealth are doing can set some kind of precedent and five, ten years from now it’ll be unthinkable that theatre used to be about sitting in rooms with lots of white people. We’ll all be doing installations on council estates and working with young people and everyone will be thoroughly enfranchised with each other.

.so that’s me eking out the last scraps. i’ll flap off now, until next time theres a carcass needs starting on. drop me a line if theres any battles or owt im not fussy.