A lot has already been said on the subject of Hilary Benn’s Impassioned Speech – but I’m a critic so that never stopped me before. 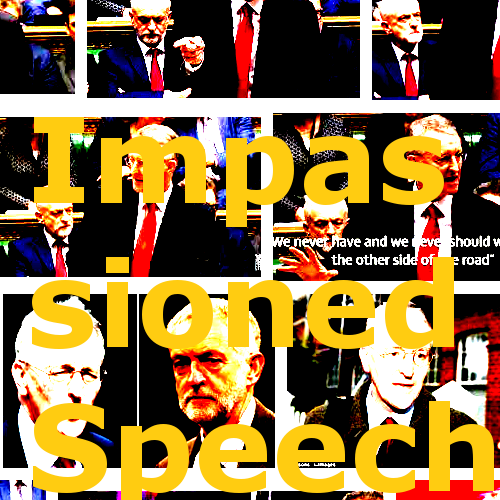 I’m not particularly familiar with Benn’s previous work, except to the extent that he’s part of an established canon of work coming out of Labour. I’ve followed Labour as a broader collective for a while, so I’m generally better acquainted with them. In a big way I understand the machine Benn’s emerging out of more than I understand the motives behind the man. But those are the characters we play with when we’re talking about a ‘political’ dramatic form – is Benn the voice of his constituents? his upbringing? (in this case) his father? or even his white-British-male-ness? Where are the lines between moral and mandate drawn in this context? In the democratic-political drama, every line is constantly blurred.

Admittedly, a huge amount of my opinions about Benn are based on assumptions I’m already bringing to the table. But Impassioned Speech takes place as part of a much longer-running work that I can’t see the end of anytime soon, and I think its form fully engenders (or at least doesn’t discourage) that way of approach. It raises the question whether we should actually be reviewing this piece before it’s actually run its course – maybe there’ll be something in the denouement that turns the whole thing on its head. But, where do we draw the line between endings and beginnings in a work like The UK Government?

As with every instalment of the series, House of Commons’s house form is pushed brutally and traumatically upon us, again, again, again. Every ‘Mr Speaker’ is another nail, hammering the rules to the church door, every bark from either side of the chamber a fervent confirmation of the semantic system built on such barks. The durational nature of the overarching Debate that this piece forms part of emphasises this relentlessness, reinforces the history of the building and its physical and psychical structures ever more strongly. The participants are exhausted, Benn, as performer is exhausted, we, as audience and political subjects, are exhausted. Reading on from this perhaps the placing of Impassioned Speech can be read as a statement on the frailty of theatrical (and political) systems, as a result of our own human frailty.

And there’s something about the clichés Benn keeps throwing out throughout Impassioned Speech that screams to me about the infinity of time. There’s endless history both in front and behind this moment, and this looming emptiness couples with the booming clichés in this piece to do a whole po-mo turn on the death of language. Benn’s intention is carried, even as meaning collapses between his pen, his page and his hard palate. And I think one of the key moments where this happens comes with Benn’s insistence on ‘the argument… for treating the two countries as one’ – sovereign borders collapse, and no longer exist, even as Benn calls the Labour party to stand with him on the much more fluidly defined grounds of solidarity, and ideology. Language and the old order is in a constant state of decay, and somehow, within the constraints of the incredibly strict format of parliamentary debate, Impassioned Speech inhabits that death.

And nothing showcases that death like the follow up Media Response piece in the past few days. Personally, I’m fully prepared to admit that yes, maybe there’s something radical in The Media’s method of spinning everything to being ‘on message’. I don’t want to go too deep here, but The Media’s transformation of Impassioned Speech‘s message into seemingly whatever they like plays right into the point Benn seems to be making about the death of language and the fluidity of meaning. Which takes us to a very nihilistic sort of point where everything is meaningless despite its fervour. Even The Media’s mirror pieces are tired, with persistent, familiar forms, and only so many ways of telling the same story.

So there’s the question: When even such ‘passion’ is ultimately exhausting and meaningless, what on earth is left to entertain us? And I know the arguments that ‘this isn’t entertainment’, but this is theatre. All the conventions are there. And it holds us. And it compels us, through the exhaustion, through the futility, through the boredom and exhaustion. There’s something in it that punches right through all that. Some reason we keep clinging on to the punishment of this formal ordeal.

If not for entertainment, why do we put ourselves through this?