Andrew Latimer has written two pieces over on his site about Writing As Hope.* To uselessly summarize, there’s a primacy (partic. in academic writing) given to Knowing What You’re On About and Explaining As Opposed To Exploring in the writing of a piece (of writing).

The “thinking” comes before the “writing” to the extent that writing is merely a vehicle of communication instead of a valuable stage in the overall composition of a thought.

Because I think I essentially agree with him, and because he states his case really clearly, I don’t want to so much critically engage with Andrew’s posts as treat them as a sort of blueprint for experimentation. Whether that’s a form of critical engagement or not is some other discussion.** So I’m going to Write this Hopefully. And we’ll see where that leads me. 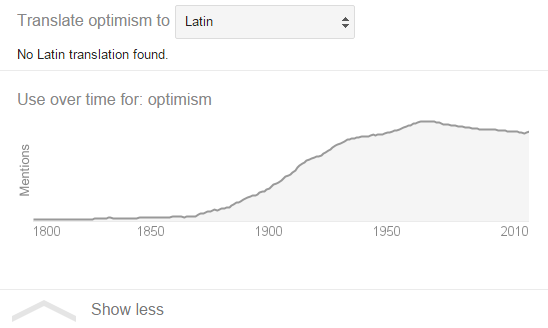 th romans had no need 4 optimism (a recent invention)

I say I don’t want to right-in critically engage but, I guess, I do. In terms of content, this is conceptually the same as writing a considered and measured contribution to the ‘discussion’. But why the hell do we privilege ‘considered’ and ‘measured’? Why in writing is spontaneity and fallibility such a poison arrow? I think we’re amongst some sort of a change on those lines; among the Twitter/Net famous are the br00tally honest Mira Gonzalez and the unapologetically*** nice Steve Roggenbuck; the way major news events unfold is dictated by the immediate and instantly global nature of Twitter (th assassination of Bin Laden, recent USA civil rights unrest come to mind). Honesty and spontaneity are among the manifold currencies of Twitter and the networks of the web, in  a big way (just look at how online news headlines have changed in the past couple years).

So fuck measured. Fuck considered. Use the word Fuck liberally, and capitalize it and switch between Americanised and StandardEnglish spellings. Write ‘fook’ if you’re a southerner and want to other the way northerners speak. And occasionally even keep on topic. It seems an intensely exposing way of writing – spontaneously and unapologetically so. Because as opposed to academic writing, it removes the shield of objectivity – sets you closer to a subjective self – puts more of your self in ur writin. So any criticism of what you’ve writen is more readily read as a criticism of your self – it reminds me of how people have been writin about work about personal trauma + mental health post- Edinburgh Fringe ’15 (an example). Writing hopefully (implicit in Andrew usin ‘hopeful’ to describe it are ideas of humility, caution & flux) creates vulnerability, I suppose. In the same way that in any discourse the more human you are the more vulnerable you are. It’s a way of searching for honesty in writing.

So to the point that I’ve been thinking around before starting writng this and hoping to hit a conclusion (srsly y is ths happenin 4 paragraphs in). Writing As Hope is vulnerable and subjective and, ultimately, more embracing of being human (including all the intersectional stuff that hides behind the assumption of ‘humanity’), right? Which I think is a good direction to be going in. But I also think it’s not enough. Because I think in order to allow Writing Hopefully, and give it the space it needs to happen, we need a kind of reading that acknowledges that vulnerability and subjectivity. I don’t know if it’s the fault more of writers or readers but the voice of the writer (and yes, I guess I’m talking more specifically about the voice of the critic) is too often read with the assumption of an assumption of objectivity.

We (and writers) need to stop imagining writers writing from pedestals. They’re writing from behind screens, just like everybody else. We’re all increasingly becoming each other’s peers and we’re all becoming increasingly answerable to people we’ve never met. Readers are closer to writers than they’ve ever been. And maybe the way to remedy this is to remind ourselves that there’s an uncertain subjectivity lurking behind every declarative sentence, every slating of a Damon Albarn musical. Let’s try to find the hope in everything we read. The problem with masculinity is it’s terrified the fear beneath its aggression will be found out, and the only thing it can mask this with is more aggression. Maybe writing (and criticism) could do with being less masculine. Maybe we could all read a little more aware of this facade.

Andrew Haydon, in Twitter conversation recently said of subjectivity in writing, ‘I’m quite looking forward to the day it’s taken for granted and I can cut 500 words…‘ And I guess that’s the day I’m writing about. And maybe if we all keep adopting this radical stance of honesty and accept that we are fallible, then eventually everyone will take it for granted. I don’t know what needs to come first, Writing as Hope or Reading as Faith, but if we keep pushing one, surely the other will follow – it’s up to us to decide which to push (if either) and when.

I think I’ve got out everything I needed to. this feels far more like a first draft than a finished thing but in the spirit of the thing, let’s abandon edit and polish. Shout into the void, and keep in mind we’re all standing on the same edge.

PS: New thought – is Writing as Hope potensh a remedy to being a critic of ‘the industry’ & also being in ‘the industry’? – praps thats another blog post (cc Meg Vaughan)

**It’s my opinion that creative response is definitely a form of critical engagement – though not a traditionally academically sanctioned one, which is of course part of the hegemony that Andrew’s writing at. To write creatively is – bizarrely – to write from a position unprivileged within critical discourses that consider creative works. That’s weird innit? The illusion of objectivity is important.

***My version of Chrome doesn’t have unapologetically in its dictionary. Keep that in mind every other time I use the word.