this is a response to
Paul Mason’s Guardian article on ‘Postcapitalism’: http://www.theguardian.com/books/2015/jul/17/postcapitalism-end-of-capitalism-begun
Marek Horn’s response to that article: http://exeuntmagazine.com/features/post-capitalist-theatre-a-thought-experiment/
and Paul Mason’s response to that response: https://medium.com/@paulmasonnews/postcapitalist-theatre-f5963f260f7d
this will make a lot more sense if you’ve read those (particularly the second two if you don’t want to read the big initial article – that’s less about art/theatre anyway)

This is three seconds of your life you won't get back. (Eight for slow readers).

Both Mason and Horn kind of take it for granted early on that the digital reproduction of art is an immediate symptom that will lead to the total devaluation of art:

As they are reproduced ad infinitum, images, songs, books will be more ubiquitous than ever, and if ubiquity destroys their financial value now then what is to say that it won’t also destroy their conceptual value?
– Marek Horn

Let’s take a BIG step back. The Venus of Hohle Fels is a figurine, carved from a mammoth tusk, that has been dated to be between 35,000 and 40,000 years old. A long time ago, a mammoth grew a tusk, the tusk was in one way or another separated from the mammoth, the tusk was carved into a figurine, the figurine was found around 40 millennia later. Yes it’s impressive that something that old still exists. Yes, I’d be excited if I saw it in person. 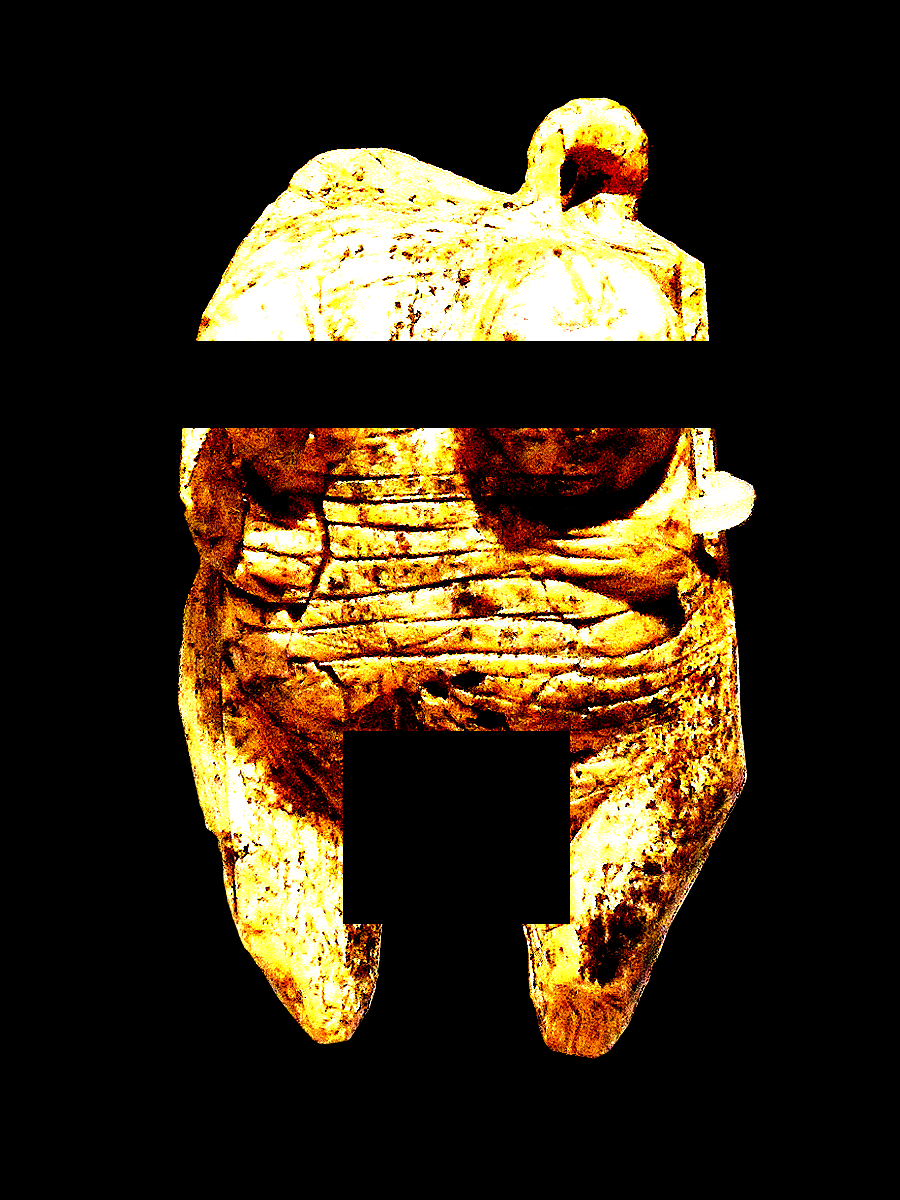 The Venus is exciting because it is an incredibly old piece of art. The Venus is exciting not solely because of its age, or its physical presence, but the combination of these two with the moment of creation it represents. It is a piece of art because it is the result of raw material taken and shaped and then left. There are rocks much older that no one cares about, because unlike the Venus they do not form a record of human intervention. Horn says ‘art cannot be made by machines, no matter how intelligent they are’ – because our concept of art requires human intervention. Take an artwork, any kind, and it will be ‘art’ because a human has done something to something else. The first something can be a rock or a mammoth tusk as much as it can be an idea or a data file (or paints and canvas, if you like). The second something can be anything at all really (in the last hundred year or so we’ve gotten progressively sillier – but we’re still doing things to other things and calling it art).

Now then, the value of art is where it gets sticky.

Art must be experienced to have value, simply because we have to assign it value and we need to experience it in some way or other in order to do that. In the context of Horn’s ‘images’ being ‘reproduced ad infinitum’, what is being devalued is access to the experience of art, not the experience itself. And art never had any absolute value, as any conversation between two theatre critics will eventually lead you to realise. I saw Damien Hirst’s For the Love of God in person for free at the Tate Modern, and it remains far less significant to me than Michael Craig-Martin’s An Oak Tree – which I’ve never seen, and – get this – never need to see. The internet did what it does and provided me with enough of the experience of the piece to understand its position in culture.

What it is important to realise is that in the internet age it is access that is being democratised. This is an access not to a physical artwork but to the ideological value given to that work. What is being challenged is not the conceptual value of (to go with Horn’s example) a Francis Bacon painting, but the ability of the private collector and the ticketed gallery to charge you to see it. What Horn calls the painting’s ‘thing-value’ (the value of the physical object) was surrendered by Bacon the moment the painting was sold. The painting’s ideas-value was surrendered far sooner than that: in the moment it was finished and first seen. We give a Francis Bacon painting its ‘ideas-value’ in how significant culturally we end up making it. What is being democratised is access to an explanation of that. Someone living in Argentina has equal access to the cultural value of a Francis Bacon painting in the Tate Britain as someone living in Derby who can’t afford a trip to London.

In his article, Horn didn’t need to explain Francis Bacon because he knew anyone not in the know could immediately search his name and find out.* This didn’t reduce the ideas-value of Francis Bacon – he still served as an argument point. Yes, in the past ideological access to an artwork demanded you have physical access – which more often than not demanded you spend capital – but now the internet is exponentially widening that gap between physical and ideological access. Now you can have one without ever dreaming of having the other.

But even in the context of the internet’s democratisation of access, money is changing hands. Go watch a Kanye West music video. I’m listening to Jesus Walks on YouTube, but first I had to watch/listen to/ignore an advert, which lasted about twenty seconds, and probably cost an obscene amount of money. Sometimes you can skip an advert after five seconds, but even by then you’ve been advertised to, and there are YouTube ads emerging that last less than that five seconds. My point is that those who are using the internet to make a profit are already incredibly aware of the shrinking value of the artwork online. Now, they are monetising the time we spend experiencing the artwork (or waiting to experience it).

Horn writes about ‘a socio-cultural matrix that doesn’t value things for their monetary worth and does value the authority of the progenitor above all other factors in cultural-commodification’, and that ‘The internet […] cannot reproduce time, and thus it fundamentally cannot reproduce the experience of watching a play.’ The internet can reproduce time. The internet sells our attention by the minute – that’s how YouTube ads work. Our thirst for immediate content has been noted and is being incredibly effectively exploited. The internet is far from free of capitalism. I would argue that we never valued art for its monetary worth – art’s monetary worth is a result of its cultural significance, not the other way round. If the Venus of Hohle Fels was carved three weeks ago by a bloke down the pub you’d be very lucky to get a hundred quid for it.

What’s more, I’ve already watched whole plays streamed live on the internet, for free. Watching those plays online for free didn’t make them culturally meaningless any more than a video being on YouTube does. Horn wants to see the devaluation of digital art as an opportunity for theatre to become the postcapitalist artform par excellence, but the crisis in the ideological worthiness of art just isn’t there. Horn treats theatre as ‘an idea explaining machine’, with its value immanent in its organic liveness. The problem is that theatre is far from being unique as a vehicle for ideas – and though it may be capable of reproducing time, it is just as dependent on us spending time to observe it as any other art form.

Yes, the landscape will change, and presumably will eventually become unrecognisable and continue to do so. But rather than this coming about through a depreciation in the overall ideological value of art, it will come about through a change in the way we consume it. The gallery will become increasingly meaningless, not because no one values art but because they value their time over seeing in person what they can learn about online. If anything, in an information economy, I’d anticipate a depreciation in the value and supremacy of live performance. If the value of something is in its ideas, then you will access those ideas as cheaply and easily as possible – you’ll stream them online.

In this case, rather than a renaissance of the stage, the stage may well fall out of the equation altogether. Paul Mason’s response to the response gives some pretty good hypothetical examples of what that might mean:

the new forms of economics that postcapitalism involves:

These bullet points seem to point towards a more ‘internet’ oriented way of thinking. I’m thinking now of dematerialised theatre, internet-hosted theatre, social theatre. Rather than a theatre that operates on the primacy of space, a theatre that demands only time, in its various forms and amounts. Pieces that are neither localised, continuous or sustained, but simply demand some sort of engagement, whenever and by whoever. Rather than recreating time and demanding we experience it in a specific moment, theatre that waits for us, for as long as we need. A canvas that anticipates the human intervention of its audience.

Is this our future? No doubt all our predictions are wrong in some way. No doubt someone will find out how eventually.

*Likewise, I’ve included no explanation of Hirst, Craig-Martin or West along the same lines.