Last time I posted up on here I rambled and bambled about postcapitalism and art and hit upon the idea of ‘postspacial’ theatre. Want to try and elaborate on that idea here.

First off, I hate using ‘post-’ as a prefix, so let’s drop the term ‘postspacial’ right now and hope by the bottom of this potentially infinite page, we’ll come up with something better. 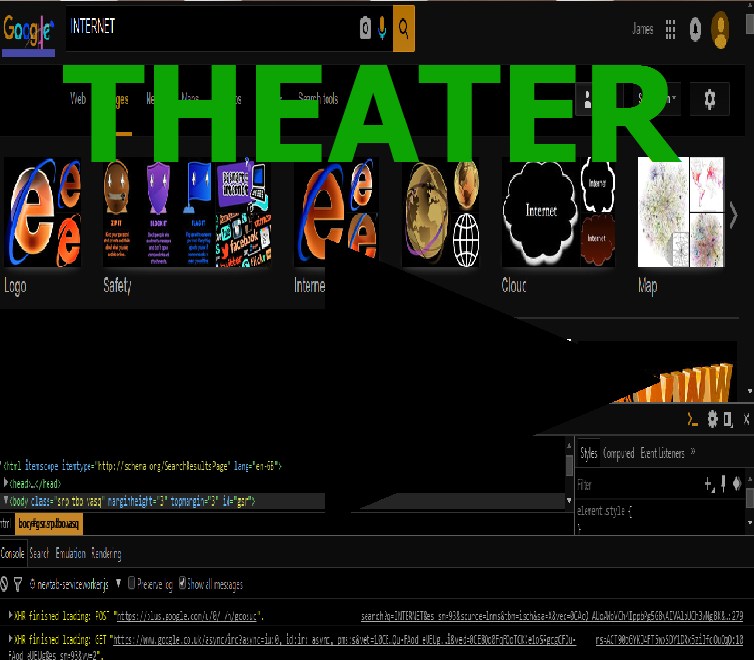 I don’t think theatre has to be physical. I think what makes theatre theatre can happen outside of a physical space. I was imagining what would happen if we removed theatre from its dependence on space – made theatre something that you no longer had to go and see, but could experience regardless of what physical space you are in. Most popular definitions/quotes about ‘what theatre is’ emphasise its liveness, and the human element – namely the drawing of people into a shared experience. More often than not, this ‘drawing together’ is a literal physical sharing of a theatrical space. But what if we remove the necessity for physical proximity? What are we left with?

Already there are popular proxies for the traditional live experience of theatre: remote watching live performances in cinemas or through online streams. Live recorded shows are played back to cinema audiences in a simulation of this simulation of the theatre experience. But what is the theatre experience? Is it the experience of being in a theatre? Or is it the sharing of an experience with others? I’d argue the latter. What is being simulated in a National Theatre Live Encore Screening is legitimated by the presence of other audience members – whether that’s the audience there with you in that present moment or the audience who saw it live in the theatre, or the audience who’ll see the next screening. In any case, I doubt tickets would sell half as well if the performance hadn’t once been live. The power of the shared experience of theatre – I think – rests on the knowledge that other people have been presented the same thing as you, in the same context – but not necessarily at the same time.

There are more factors, definitely. But this is the one I want to focus on in terms of removing theatre from a physical format. Because if the time and space in which you experience a piece of theatre are secondary to the knowledge that other people can/have experienced it, then it follows, surely, that you ought to be able to create theatre that demands its audience experience it in neither a specific time or space.

And I think we definitely can.

Twenty, maybe even ten years ago it would have been a lot more difficult, thirty/forty years ago pretty much impossible. But of course now we have the internet. We’re all really enamoured with the internet, aren’t we? It’s so limitless, it’s constantly changing, it folds in on itself and echoes its most popular parts like the most efficient form of evolution. We’re all on the internet and it’s so big and ambiguous and obscure and connected. If you think about it, the whole of the internet is evidence of life, is a mode of connection with other people – if you’re on a webpage, someone made it – if you read an article/comment/tweet, someone left it there. It’s like a giant forensic record of humanity. But importantly, it’s virtual and infinitely accessible – it exists all the time and in no specific space.

And no, I’m not going to say ‘the internet is a piece of theatre’ and smugly shut my laptop. Because it isn’t – it’s too big, too vague. That’d be like describing a rainforest as a garden, gardens need to be made. I do think, though, that the internet would make a cracking venue. Though venue’s probably the wrong word and maybe the right word is medium.

The internet would make a cracking medium.

I wrote in my last post about art requiring us to spend time on experiencing it, and the idea of theatre that demands from us only that time of experience – no physical investment. Here’s an example of what that might look like: Imagine a webpage or site that changes depending on how long you spend on it. Let’s say it takes the form of a blog, and ‘updates’ every 36 hours with a new post from the moment you read the last one. At first the posts seem fairly innocuous, maybe not even all that interesting, but eventually a meta-narrative emerges, characters develop, shit happens, maybe the website ends up changing entirely, directs you to a ‘sequel’ site, or just shuts down. But clear your cookies and it’d happen all over again.

This is a really simple idea and just one example but. Would that be theatre? Tentatively, I’d say it would.

Or say you’ve got a site that works in the same way a piece of site specific theatre would work. Different pages, staff pages/bios/newsfeeds that change over time. Imagine The Drowned Man as the website of a production company. Imagine Richard III as the website of the royal family. Imagine Cleansed as the BBC news website. Imagine The History Boys as a Google doc of revision notes.

This would be theatre that uses the internet as a medium, and has huge potential to experiment formally with time – something there’s little freedom for in a physical theatre piece with human actors. It would demand from its audience all the attention they’re willing to give and could be far more complex than the examples I’ve come up with, incorporating live online elements, turning a single theatre piece into on ongoing long-form experience for its audience. I think there’s massive scope for internet theatre. What do you reckon? What would we call it? Maybe theatre makers should start learning to code.